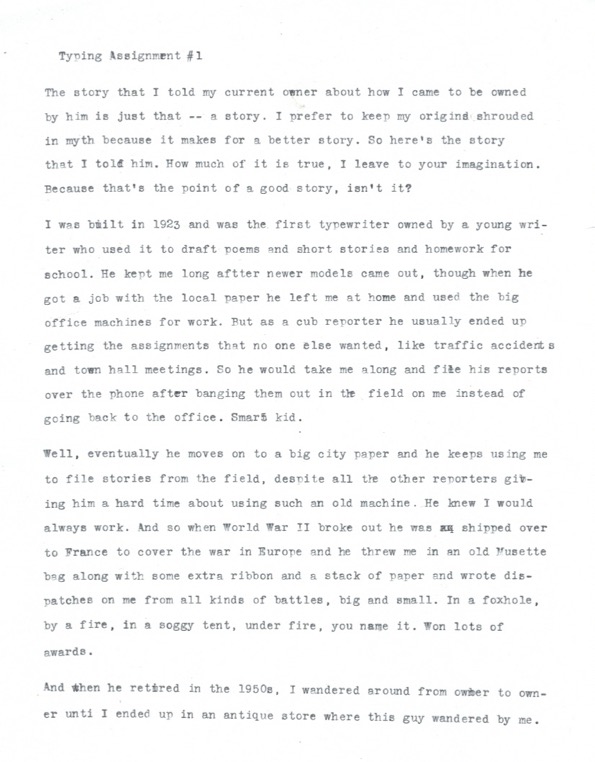 Joe Van Cleave recently launched a new series called Typing Assignments, in which he invites Typospherians to flex their typing muscles on fun short writing assignments. This is my homework for Typing Assignment #1, which is “to anthropomorphize your typewriter and have it describe how it “found” you, and how it feels about its relationship with you, the writer.” Enjoy!

Comments Off on Typing Assignment #1

Something I whipped up this evening in response to a recent discussion in the Facebook group of the Star Trek TNG podcast “The Greatest Generation.” The topic was a 20-minute fan edit of Star Trek: The Motion Picture. One of the participants raised the question: Is it possible to make a fan edit of the movie that’s even shorter?

My response: Hold my beer:

I say “showed up” rather than “marched” because we arrived at the Ellipse by the Washington Monument early, around 9 am, and left shortly after noon, as the crowds were really starting to come in. As we joined the thin stream of departing early birds — soaked, cheerful, signs streaked with runny ink — we passed our metaphorical batons to the fresh crowds heading in the opposite direction, heartened by the fact that they outnumbered us many times over.

While we were there, we crossed the street to visit the World War II memorial, the first time Mrs. Sotto Voce and I had been there. As I viewed the bronze bas-relief scenes and read the long lists of battles carved in stone, I couldn’t help think about the role that science played in that war, for good and evil. The perversions of racial “science” triggered it, and the splitting of the atom ended it. And in between, science contributed to the development of countless things — medicine and surgery, ballistics and rocketry, propulsion and fuels, and so much more. Being reminded of that amid the pillars, victory arches, and Roman splendor of the memorial brought home to me the power of science in ways I hadn’t expected.

But science is more than inventions and discoveries that make our lives better (or, in the wrong hands, worse). The greatest, most fundamental contribution of science to our world is the method that makes those inventions and discoveries possible in the first place. Science is a way of asking questions that leads to meaningful answers. It is by far the single most successful technique that we humans have created so far for enabling us to discover how and why things appear to work, in ways that let us build on those insights to improve on what we have.

Scientific inquiry starts from a place of humility, an acknowledgment that we do not know. We come up with theories and hypotheses, we test them, we fail, we learn a little bit more, and use that to fail again better next time. A fundamental precept of science is openness to being wrong.

Of course, being human, we hate to let go of our pet hypotheses because we really, really wanted them to be right. And, being human, all too often we tie the fate of our reputations and our institutions to those outcomes too. But ultimately the preponderance of evidence carries the day and whether we like it or not the facts lead where they will, indifferent to wounded egos and failed grant applications.

A scientific fact is evidence that has prevailed.

And when we find its limits, when a fact no longer prevails, that in turn points us to the new facts that will replace it, on which we can build even further.

The opposite of scientific thought is a certainty born of a belief that one has already found all the answers that matter. The certainty that one’s way of viewing the world is complete, correct, and therefore sufficient not just for oneself but for everyone. The certainty that, because of those things, nothing needs to change — and, by extension, that change is a threat.

This issue cannot be reduced to a simple “conservative religious zealot vs. liberal godless snowflake” debate. Close-mindedness and certainty are absolutely nonpartisan and nondenominational. They affect every one of us, often in ways that we cannot see. Our fundamental mistake is to confuse “factual” with “right.”

Here’s the test: if you find yourself being faced with an empirically validated fact that challenges your worldview and you decide to stick with the worldview and deny the fact, then you’re the problem.

Sure, that fact could actually be wrong. But it’s up to you to prove it. Come up with an alternate hypothesis, test it, and see what happens. If you’re right, then we all have learned something that we didn’t know before. But you can’t be afraid of finding out that you’re wrong.

When Bill Nye debated Ken Ham about whether creationism is a viable model for explaining the origin of life, the last question was (and I’m paraphrasing here), If you were to be provided with sufficient evidence that your opponent’s point of view is actually the correct one, would you change your mind?

Bill Nye answered “Yes,” Ken Ham answered “No,” and that right there is the difference.

In this concluding episode of the Majestic restoration series, the pen is assembled … but will it write?

I broke the cap band on the Majestic and thought I’d use my blunder as an opportunity to explain how manufacturers used to install bands on fountain pen caps.

My production values continue to gradually improve. The better lighting and magnification are thanks to Cyclops the Lamp, and I now have a mic stand so I can use my Blue Snowball instead of my iPhone’s built-in mic. And check out my first stab at animation!

Comments Off on Cap Bands

My friend Matt rescued this lamp many years ago and recently gave it to me when he was cleaning house.

Comments Off on Interlude: My New Lamp

Now that I finally have a space heater in the Pen Shed, I can pick up my latest project where I left off a while ago.

Comments Off on Majestic Update: Polishing the Barrel 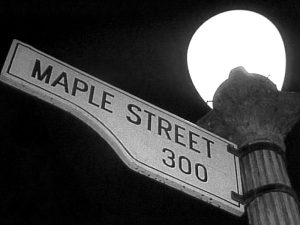 “The tools of conquest do not necessarily come with bombs and explosions and fallout. There are weapons that are simply thoughts, attitudes, prejudices, to be found only in the minds of men.

“For the record, prejudices can kill, and suspicion can destroy, and the thoughtless, frightened search for a scapegoat has a fallout all of its own — for the children, and the children yet unborn.

“And the pity of it is that these things cannot be confined to the Twilight Zone.”

Comments Off on The Dreaded Lever-Ring Bulge

Comments Off on Majestic Update: Attaching the Ink Sac